vPoller is a distributed system written in Python for discoverying and polling of vSphere Objects properties.

vPoller uses the vSphere API in order to perform discovery and polling of Objects from a vSphere host (e.g. VMware ESXi or VMware vCenter server instance).

The vPoller distributed system consists of a number of components, each performing a different task:

On the diagram below you can view the principal work of the vPoller distributed system: 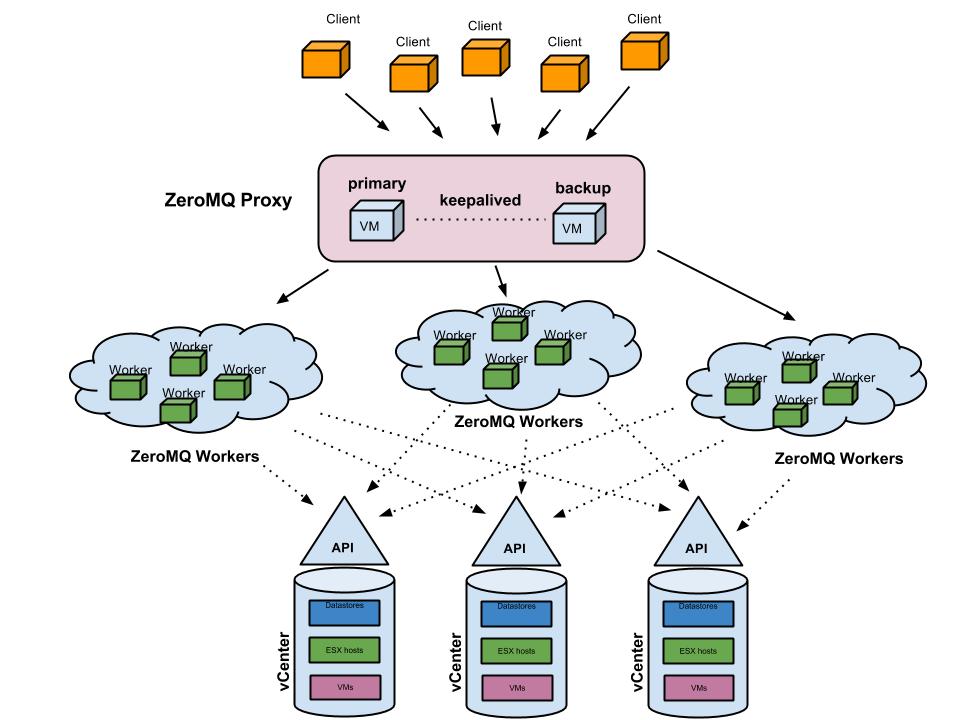 The distributed nature of vPoller is provided by ZeroMQ, which also load balances client requests to a pool of vSphere Workers.

vPoller was designed to be easy for integration into systems which require access to vSphere Objects properties, but do not have native support for it.

vPoller can also be described as a VMware vSphere API-Proxy, because it translates user requests to vSphere API requests thus allowing the user to use the API without having the need to know how the vSphere API works internally.

vPoller has been tested with vSphere 5.x and with very limited testing on vSphere 4.x

In this article we will see how to install, configure and manage the vPoller components.

Here we will focus on the actual usage of the vPoller distributed system in order to perform discovery and polling of vSphere Object properties.

The C client of vPoller also requires the following packages to be installed in order to build it:

First, make sure that you have all the requirements listed above installed before starting with the installation of vPoller.

In order to install vPoller simply execute the command below:

We need to create a few directories as well, which are used by the vPoller components to store their log files and lock files as well, so make sure you create them first:

Now, go to the next section where we will see how to configure the vPoller components.

First, let’s configure the vPoller Proxy, which is component that takes care of dispatching the client requests to our vPoller Workers and does the automatic load-balancing using ZeroMQ.

The default configuration file of the vpoller-proxy resides in /etc/vpoller/vpoller-proxy.conf, although you can specify a different config file from the command-line as well.

Below is an example configuration file used by the vpoller-proxy:

Internally it runs the vSphere Agents, which take care of connecting to a vSphere host, initiating the user’s API requests and send back the result to the client.

A vPoller Worker can connect to any number of vSphere hosts, where each vSphere connection is handled by a separate vSphere Agent object.

In this example we will be running a vPoller Worker on two nodes of our infrastructure in order to provide redundancy and load-balancing. Each vPoller Worker will be connected to a single VMware vCenter server instance from where we will be getting our results.

The default configuration file of the vpoller-worker resides in /etc/vpoller/vpoller-worker.conf, although you can specify a different config file from the command-line as well.

Below is an example configuration file used by the vpoller-worker:

Below is an example configuration file /etc/vpoller/vsphere/my-vc0.conf, which describes the connection details to our vCenter server.

You should take care of securing the files as well, as they contain the password in plain text.

And that was it with the configuration, now let’s go ahead and start up our vPoller Proxy and Workers.

Once you configure the vPoller Proxy and vPoller Worker we can go ahead and start them up.

You might also consider using the init.d scripts from the vPoller Github repository, in which case you could start it using service(8).

You might also consider using the init.d scripts from the vPoller Github repository, in which case you could start it using service(8).

Check the log files at /var/log/vpoller which should indicate that the components started up successfully or contain errors in case something went wrong.

The examples below show how you can use vPoller in order to perform discovery and polling of VMware vSphere environment.

When we send a request to our vPoller Workers we usually send the method to be performed (e.g. discovery or polling) and the vSphere Object property name.

You can find the available vSphere Object property names you can use at the vSphere API online documentation.

Time to test out vPoller. In this example we will see how we can discover all ESXi hosts, which are already registered to our VMware vCenter server instance.

We will be using vpoller-client tool in order to send requests to our vPoller Workers.

For more information about the different command-line options supported by vpoller-client, execute the command below to get usage information.

Considering that the vPoller Proxy endpoint is at tcp://localhost:10123 in order to discover the ESXi hosts on vCenter vc01-test.example.org you would execute a similar command:

The returned result shows that we have only a single ESXi host registered to our vCenter server instance.

In the next examples we will use the information that we’ve discovered already in order to perform polling of Object properties.

Discovering Datastores on a vCenter server

Now, let’s see how we can discover all datastores on our vCenter server instance.

On the screenshot below you can see the request we send to our vPoller Proxy and the result returned to the client from the vPoller Workers. 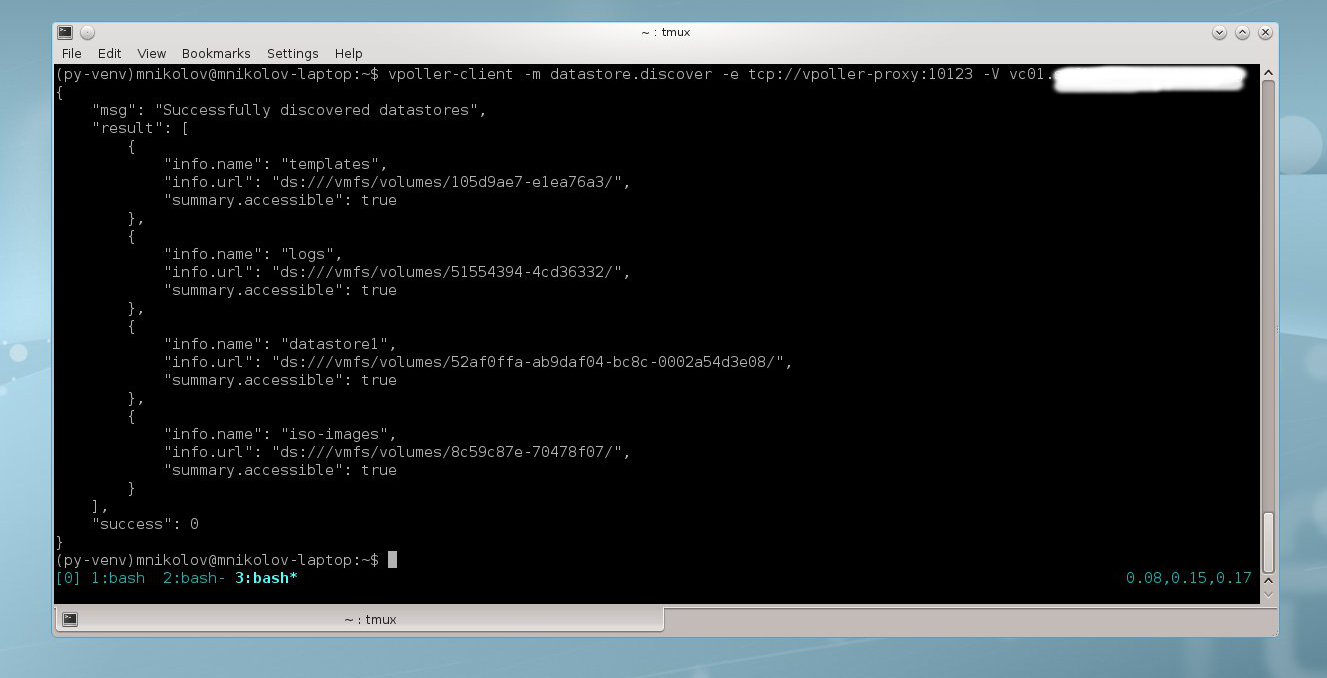 The returned result shows us all datastores that we have on our vCenter server instance.

In the next examples we will use the information that we’ve discovered already in order to perform polling of Object properties.

Let’s see now how we can perform polling of vSphere Object properties. By using the information we’ve got from discoverying the ESXi hosts and datastores from our vCenter we will now send a request for different properties of our vSphere Objects.

Example request to get the power state of an ESXi host. The property we want to retrieve is runtime.powerState.

What amout of memory do we have on our ESXi host? The property we want to retrieve is hardware.memorySize.

Let’s see what was the time our ESXi hosts booted. The property we want to retrieve is runtime.bootTime.

Okay, let’s poll some properties now about datastores. Using the discovery information we got previously we will now see how to get various information about our datastores.

What is the capacity of our datastore? The property we want to retrieve is summary.capacity.

What is the name of our datastore? The property we want ot retrieve is info.name.

Let’s see the amount of free space we have on our datastore. The property we want to retrieve is info.freeSpace.

Again you are advised to check the vSphere API online documentation for more information about the object property names you can use.

Using the management interface of vPoller

This is how you could get status information from your vPoller Proxy: 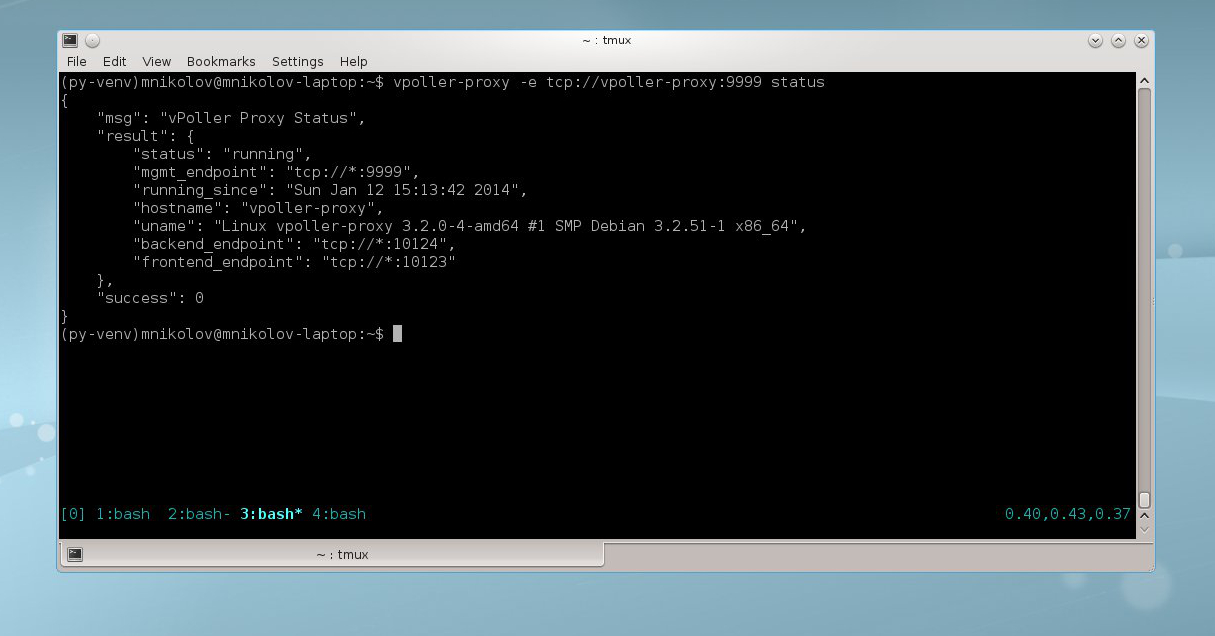 And this is how you could get status information from your vPoller Workers:

The management interface of vPoller Proxy and Worker also accepts commands for shutting down the components.

This is how you could shutdown your vPoller Proxy by sending a shutdown message to your node:

And this is how you could shutdown your vPoller Worker by sending a shutdown message to your nodes:

You can also perform these operations using the init.d scripts from the vPoller Github repository.

The vPoller Helpers were implemented in order to provide an easy way for connecting your applications to vPoller.

The result messages returned by a vPoller Worker are always in JSON format.

This could be okay for most applications, which require to process a result message, but in some cases you might want to receive the result in different formats.

By using the vPoller Helpers you are able to convert any result messages to a format which your application can understand and use. This is useful for presenting the information in a way which you can feed it to your application.

An example of such a vPoller Helper is the Zabbix vPoller Helper module, which can translate a result message to Zabbix LLD format and return property values ready to be used in Zabbix items.

Let’s see how the discovery of datastores looks like if we the Zabbix vPoller Helper:

The result is returned in Zabbix LLD format format which is useful for creating discovery items in Zabbix.

This is how things look like if we try to poll a property using the vpoller.helpers.zabbix helper:

As you can see we only got the result value of our property which makes it useful for using in items, which require a single value to be returned to Zabbix.

Examples of other vPoller Helpers could be an HTML vPoller Helper, which returns the result in HTML format in order to present the information nicely in a web browser.

This was just an introduction to vPoller and what it can do. For more and up-to-date information about vPoller you are advised to check the vPoller documentation on Github.

In case you experience any bug issues, please report them to the vPoller issue tracker on Github.