I’ve been a Zabbix user for quite some time already, but one thing that Zabbix lacked for a long time is the ability to monitor VMware vSphere environment.

For some time I’ve been looking for alternatives, but being a Zabbix user and supporter, I’ve decided that if we don’t have VMware monitoring in Zabbix yet, well… I could possibly add support for it!

So, I’ve decided that I would actually start a new project on my own.

However one thing that I didn’t know at the time I first started with my new project was that the Zabbix folks were already working on getting VMware vSphere monitoring in their next release. VMware vSphere support in Zabbix became available with the 2.2.0 release of Zabbix

Now, you might be thinking that all that work I’ve been doing was a waste of time for me, but I really don’t think so.

The project I’ve been working on eventually became something more. It was not just oriented towards Zabbix anymore. It became a general purpose VMware vSphere Poller allowing it to be integrated into systems which would require access to vSphere Objects, but do not have native support for it.

So, in this post we will see how to use vPoller and integrate it with Zabbix in order to perform monitoring of your VMware vSphere environment. vPoller has been released for some time already, but until now I haven’t really found time to write about the Zabbix integration with vPoller. So, in this post we are going to talk about Zabbix and vPoller and how to use them together in order to monitor VMware vSphere environment.

But, before we do that let’s first see why you would want to have vPoller instead of stock Zabbix vSphere support and what are the differences between both.

How stock Zabbix compares to Zabbix with vPoller

The table below tries to summarize the VMware vSphere features of stock Zabbix and Zabbix with vPoller:

Now let’s say a few words about the table info above. Zabbix VMware vSphere support is already part of latest Zabbix releases (2.2.0 and above), but in my opinion it still needs some work on it.

For example with stock Zabbix you get what get – all the VMware vSphere support is built-in directly into Zabbix. From one side that is okay, but from another it is not so good. One example is that you cannot simply get new VMware vSphere items easily in your Zabbix templates in order to get more data out of your vSphere environment. In that case you are left alone – you either wait for the next release of Zabbix which would give you that new feature/items or end up patching Zabbix yourself with these new features. Both of these scenarios might not be what you really want to do.

Another issue I’ve seen with stock Zabbix VMware vSphere support is that it doesn’t play well with recent vSphere releases, e.g. with the 5.5 releases. Most of the time I’m seeing Zabbix items being disabled due to timeouts, while there are no real timeouts. Lots of users have encountered this issue as well, so this probably means a bug somewhere in Zabbix, which would hopefully get fixed soon. You can check just a few of the many issues already reported regarding this issue here, here and here.

With Zabbix and vPoller integration what you get is this – extending the number of supported items is easy. You just need to specify the vSphere Object and it’s property name and you can start monitoring that item right away. It is that easy to add support for something that you don’t have yet!

vPoller uses the official Python vSphere bindings, developed and supported by VMware. That guarantees that vPoller will stay compatible with future VMware vSphere releases as well.

vPoller scales. vPoller uses ZeroMQ in order to create a distributed system of vSphere workers responsible for polling of vSphere object properties. This is similar to the Zabbix Proxies, except that you can run any number of vPoller Workers on a single machine.

If you want to read a bit more about vPoller you can do so here, here, here and here. You can also find more information about vPoller at the Github repository of vPoller.

You might still be asking yourself why would you want to try out Zabbix with vPoller integration? Here are few more reasons:

Now, let’s start with the installation and configuration of Zabbix with vPoller integration.

When you are ready with the vPoller installation and configuration make sure you have your vPoller Workers started and ready for polling from your VMware vSphere hosts.

Once you import the Zabbix vPoller Templates you should see eight new templates in Zabbix. You can see the templates from the screenshot below:

Now we need to add two scripts to the Zabbix externalscripts directory. The scripts we need to put there are the vpoller-zabbix and cvpoller-zabbix, which are simply wrapper scripts for use with vPoller and Zabbix.

Grab the vpoller-zabbix and cvpoller-zabbix scripts from the links below and place them in your Zabbix externalscripts directory:

Make sure these scripts are executable as well:

And that was all for the installation and configuration. In the next chapter of this post we will see how to add a VMware vCenter server and start monitoring it.

Monitoring with Zabbix and vPoller

Let’s go ahead and add a VMware vCenter server, so we can start monitoring it.

Login to your Zabbix frontend and navigate to Configuration -> Hosts, then at the top-right click on the Create host button. Fill in the hostname of the vCenter we are going to monitor and add it to a group, e.g. vCenters in my case. 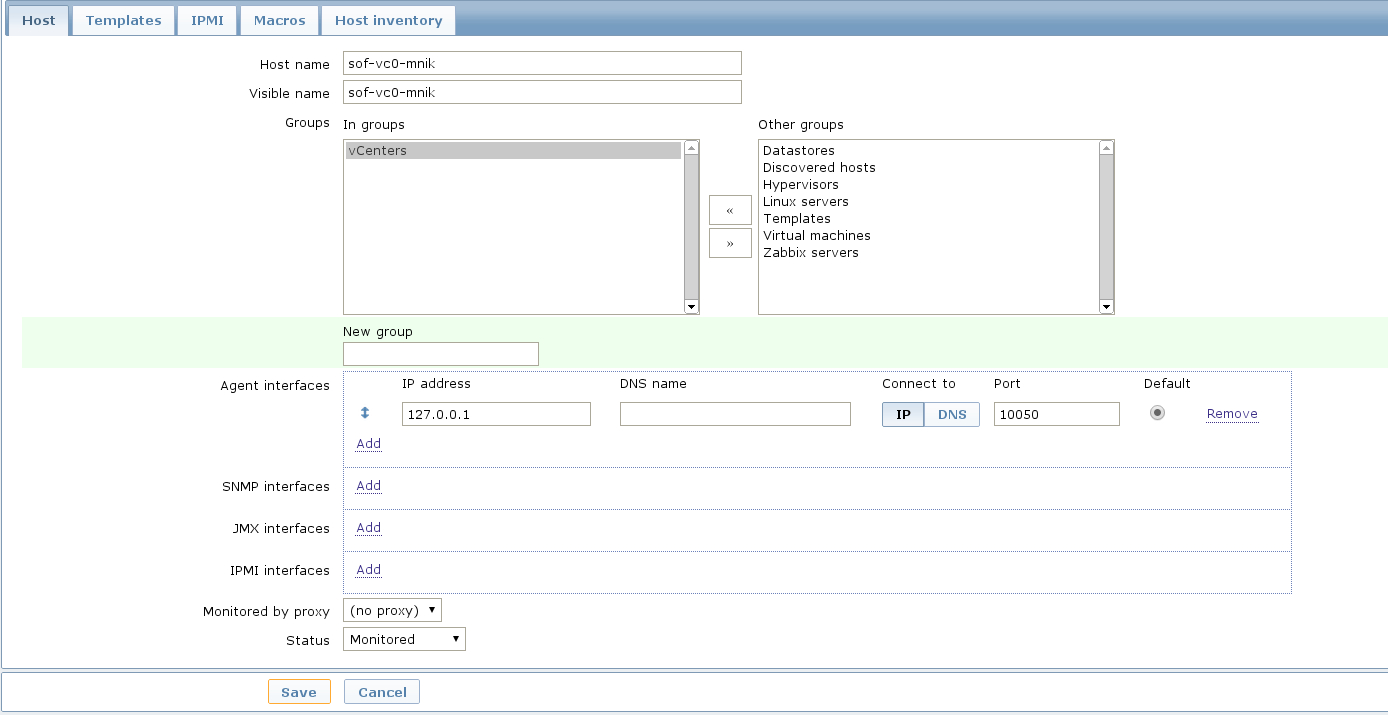 Next, click on the Templates tab and add the Template VMware vSphere - vPoller template to your vCenter.

The last thing we need to do is add a macro for our vSphere host. Navigate to the Macros tab and add the {$VSPHERE.HOST} macro with value the hostname of the vSphere host.

Once done, click the Save button and you are ready.

Soon enough Zabbix will start sending requests to vPoller which would be discovering and polling object properties from your VMware vSphere environment. Using vPoller Zabbix will discover all your hosts, virtual machines, datastores and start monitoring them.

Checking the latest data for our vCenter server:

Let’s see the latest data for some of our ESXi hosts:

And here is the latest data for some of our Virtual Machines:

As you can see we can get quite a lot of information from our VMware vSphere environment by using Zabbix and vPoller.

If you have any questions or issues regarding vPoller, please submit an issue to the vPoller issue tracker at Github.