Creating an orchestration framework in Go

During the last few months or so I’ve been playing with Go in my spare time in order to get myself familiar with the language and build some experience with it.

People often learn easier by doing things and I am no exception in that regard, so in order to get myself familiar with the language I thought I’d need a project to work on, where I could practice my skills and learn.

It was back then when I started working on my first Go project named Gru, which is described as a simple orchestration framework. 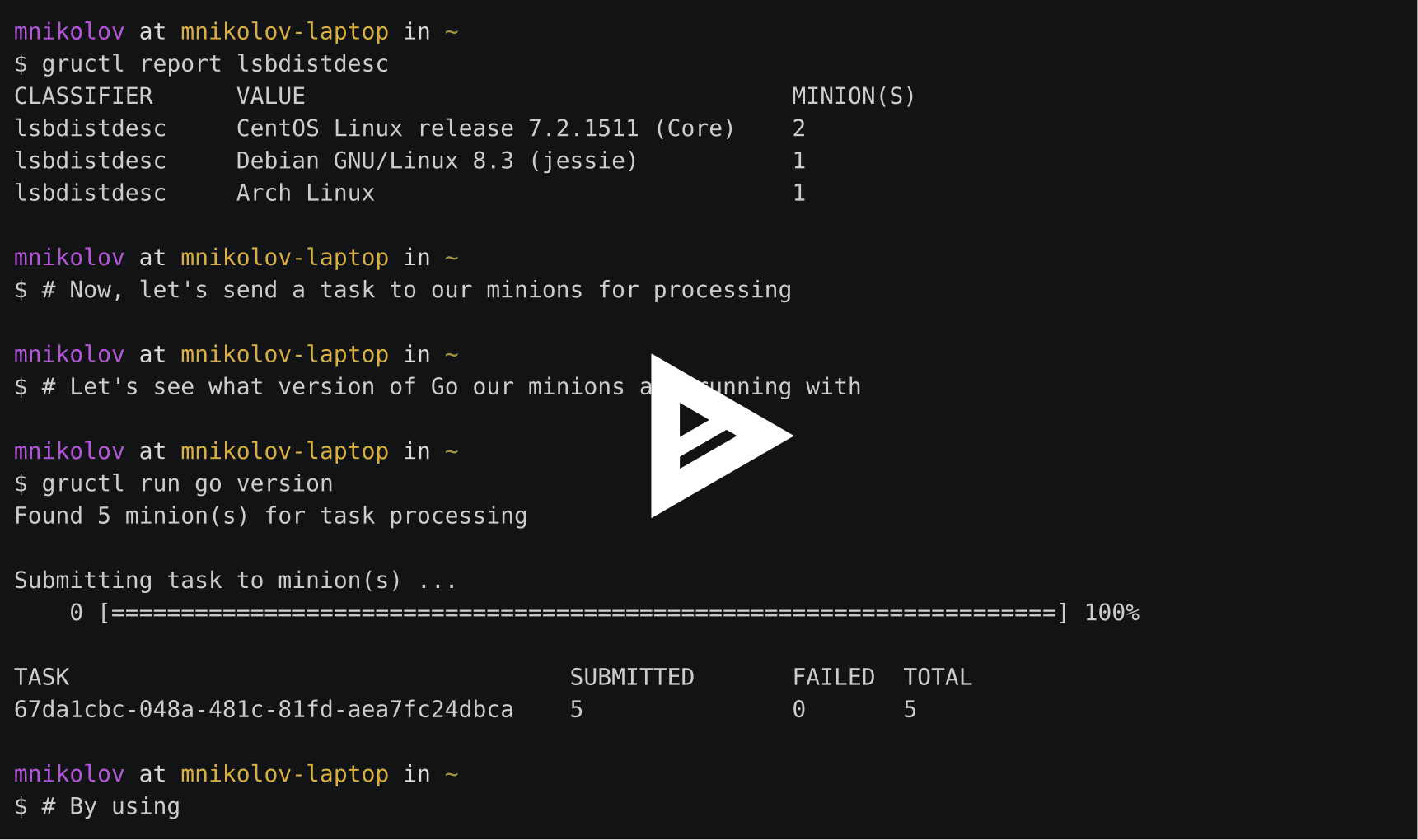 I must say that so far I’ve really enjoyed coding in Go.

The language itself tries to keep things simple and minimalistic, which I liked a lot. This makes things much easier to understand and learn even when you start with your first projects in Go.

Maybe because of my C background (or something else), but coding in Go to me almost feels like home!

Most of my coding time recently has been occupied with Python, which is another great language, but there are areas when simply doing things in Python don’t bring the required performance due to the interpreted nature of the language.

On the other hand Go is well known for its concurrency primitives called goroutines, which makes things so easy to create concurrent applications.

I also like the way how easy it is to communicate between your goroutines by using channels.

Of course in Go we still have the low-level synchronization pritimives such as sync.Mutex which provides a mechanism to manage access to shared resources using locks.

A type can then implement a given interface (or multiple interfaces) by defining the required methods of the interface types. Interfaces in Go are similar to the Traits in Rust, although in Go an interface is implicitely implemented while in Rust they are explicit.

Of course there is so much more that can said about the language, but probably that would be best done if I leave that for another post.

This post is about Gru and how Gru can be used to orchestrate your systems.

Gru is written in Go and is designed around two core interface types - a minion.Minion and client.Client interfaces.

A Client sends some tasks for processing and the Minion processes them and returns some result. That simple. Well, maybe not that simple, because Gru also gives you a way to better orchestrate your environment based on various classifiers which a minion has, e.g. send task to minions which run only on FreeBSD or GNU/Linux operating systems, filter minions based on their architecture, etc.

Gru can also generate reports about your environment based on the minion classifiers, so that you could quickly get an overview of your environment. Of course Gru also keeps a log for each executed task, which makes it easy for you to run audits and see what was done and when in your environment.

We may even implement the whole communication layer using ZeroMQ and turn our minions into a distributed system quite easily.

Eventually, it is up to the developers to pick an implementation of Gru’s interfaces, depending on their needs.

Currently Gru comes with an implementation of its core interface types using etcd, which is a distributed key/value store. Tasks are being sent to and received by minions from etcd. Using etcd also makes things easy in terms of discovery.

Getting started with Gru takes a few minutes. Literally.

All you need to do is get etcd and start your minions.

Get etcd and start it:

Next we install Gru:

And now we can start our minions:

Everything in Gru is managed by the gructl tool. For instance in order to send a task to all your minions and get their uptime you would execute:

Now this task will be sent only to minions which are running FreeBSD as their Operating System.

And of course there are other things we can do with Gru, such as generating reports based on minion classifiers, getting detailed info about a minion, reviewing logs of previously executed tasks, etc.

And that was all for now about Gru. For more information about Gru, please make sure to check the Github repository of Gru.

Meanwhile I will continue coding in Go and build more experience with the language.